Thanks to owning our own outlet, as well as our growing wholesale business, we at G&P are lucky enough to be immersed in cafe culture. The speciality coffee market has seen extraordinary growth over the last decade, with the market forecast to have increased by almost 100% by 2020*. This growing interest in everything from provenance to roasting technique, to texture of milk has seen London explode with identikit, barista-led coffee shops - each fighting for the London workers’ loyalty. Behind that latte-art, however, are the roasteries - the brains behind the beans that coffee shops wear like badges of honour on their counter-top grinders.

Two of the names popping up across the capital, and often found alongside our teas, are roasters Assembly and Volcano. Both originate from one roof - that of Volcano Coffee Works. We are delighted to now be their official tea partner, meaning cafes, restaurants and offices will be able to order our tea alongside their beans. In order to celebrate this new partnership, we decided to head over to their Brixton HQ to hear more about who they are, what they do and how it all started.

It is a beautiful sunny morning in London – a rarity this January - when we arrive at Volcano, just as the team finish their weekly meeting. The staff burst out of one of their glass meeting rooms, clutching notebooks, clearly eager to crack on with their lists for the day. We’re lucky enough to be hearing about the Volcano journey from the founder himself, Kurt Stewart, who is, I’m told, widely acknowledged to be ‘the nicest guy in coffee’.

A passionate chef-turned-roaster, Kurt (a Kiwi, of course) is central to it all. While the business he built bustles around him, he seems to sit calmly at its core. As passionate about the coffee, its origin and the opportunity to explore as he was when he first established the business as a one man operator, you can’t help but think that Kurt, and his dedicated and exacting approach to the product, is this roastery’s secret weapon. These shiny new digs, as well as the buzz in the air, are a sign of exciting times for this South-East London team, but we were eager to know from Kurt how it all started.

Just like Good & Proper Tea, it all started with a man (or woman in our case) and a van. Arriving in London in the early nineties, fresh from various barista and chef gigs from New Zealand to London via Sydney and the U.S, Kurt was struck by how an increasing focus on provenance and ingredients in food had failed to translate into the coffee world. Curious to explore this, Kurt first started roasting for himself, utilising what he’d learned in kitchens, before going on to train with start-up roasters in Portobello Market. It wasn’t until 2006 that he finally branched out on his own as Full Steam Espresso, making coffees from a mini Ape van outside West Dulwich station. As word of his freshly roasted beans got out, his morning queue grew and he soon became the go-to guy for events in and around South East London. But Kurt gradually realised that the busier he became and the more loyal customers he gained, the more pressure he was put under to spend time away from what he really wanted to be doing - roasting coffee. Those days and years spent making flat whites for locals were, however, instrumental in his future success.

While his regulars, fixed in their daily routine, were reluctant to let Kurt go, their support and loyalty were key to the next chapter. It was this pool of customers and their powerful recommendations that gave Kurt, now operating under the brand Volcano, his first wholesale customers - an impressive list of some of London’s best known restaurants and cafes - many of who remain loyal to Kurt and his team today.

Seven years later, Volcano Coffee Works supplies some 150 restaurant, cafe and office partners across the UK, under the Volcano Coffee brand, as well as under their more recent sister brand, Assembly - the latter of which just last month was named an Honouree in the Notable Roaster category of the prestigious Global Sprudge awards - the only London Roaster to receive a nomination.

As we stand next to their latest toy, an impressive, low emission Loring S15 Falcon roaster, Kurt explains that, although choosing the beans themselves is important, it is ultimately the recipe in the roasting that makes a particular coffee stand out.

'Just as two chefs might start with the same ingredients but produce very different dishes, the coffee we produce at Volcano is for the most part a reflection of our team’s palate. And we hope that that palate is a balance of showcasing the coffee at its best, while also representing an accessible profile that the customers will love.' Samples of the single-origin green beans sent from the farms they work with go through multiple test roasts to assess potential and establish how best to highlight the particular flavour notes of those beans. Once they go ahead with a particular harvest, the beans will then be batch-roasted to that chosen profile, either here or down the road in their much larger production facility in West Norwood - each roast carefully monitored by hi-tech roasting software that Kurt delights in showing us. Finally the roasted coffee is ‘cupped’ by the team to ensure the flavour output is maintained batch to batch - the last step in an obsessive approach to quality control that is key to ensuring a consistent brew for their customers.

With Kurt as master-roaster, Volcano’s passion for the product is clear, but within London’s fiercely competitive specialty coffee scene, pure passion alone is no longer enough - after all there is no lack of hobbyists in the world of coffee. When asked what else makes Volcano stand out, Alex Littlejohn, Managing Director of this fast growing team, explains how it is everything else that goes alongside that will ultimately help them grow:

'The specialty coffee market is still in its infancy but it’s an exciting time for the Specialty Roasters, as together as an industry we’re strong enough now to make the big commodity coffee operators take note of changing customer demand. The market will soon start to converge as those in the specialty space begin to operate more at scale by making great coffee more accessible, while the commodity operators are already mirroring many of our attributes and upping their game in terms of quality - at least in terms of their marketing messages!'

The important role Volcano hopes to play in this changing market is to lead the way in terms of educating the customer, which comes down to ensuring that the coffee that they take so much care in sourcing and roasting is as good as it can be when it reaches the customer’s cup. Just as when we hand our tea over to our cafe and restaurant partners, we work hard to ensure they have everything they need to make the best possible cup, Volcano take training of the ultimate purveyors of their products (the baristas) very seriously indeed.

While we chat to Alex and Kurt, a sunlit room next door is filled with staff from cafes and restaurants across the city, all listening intently as one of the Volcano team demonstrates on a shiny La Marzocco machine how to pull the perfect espresso shot and to ensure every variable that can affect the flavour is properly monitored. This training facility, surrounded by sacks of beans fresh from origin, helps those who will be serving the customers to understand the product itself better, and appreciate how to get the most out of it. Sustainability too plays an important part in their way of doing things. Thanks to Kurt’s interest in provenance from the outset, they’ve been lucky enough to build some great relationships with suppliers over the years. But their scale now allows them to start truly to make an impact. Not only have they invested in two state of the art Loring Roasters at their production facilities, whose patented roasting process dramatically reduces both fuel consumption and gas emissions, Volcano have also recently invested in a co-operative in Colombia, giving the farmers better access to production facilities, and allowing them a fully transparent supply chain between the grower and the customer’s cup. Their Volcano at Home 100% compostable Nespresso Compatible coffee pods, the first of their kind, were also awarded Most Innovative Consumer Product at last year’s London Coffee Festival - again a demonstration of their commitment not only to sustainability, but also to making their product accessible to everyone.

The deliciously tea-like, Ethiopian filter I was made on arrival has long since come to an end, but it seems we could all go on chatting for hours. From the nuances of sourcing to our approach to training partners, latest news of the latte-levy to the importance of authenticity, it’s clear that there is a lot of common ground here. We look forward to working with their team more closely over the next few months, but for now it’s time for us all to get on with the day ahead. But before we do, a proud Kurt wants to show us “just one more thing” on his shiny new roaster…

Find out more about Volcano Coffee Works or buy their coffee online at volcanocoffeeworks.com.

*The Future of Coffee, Allegra 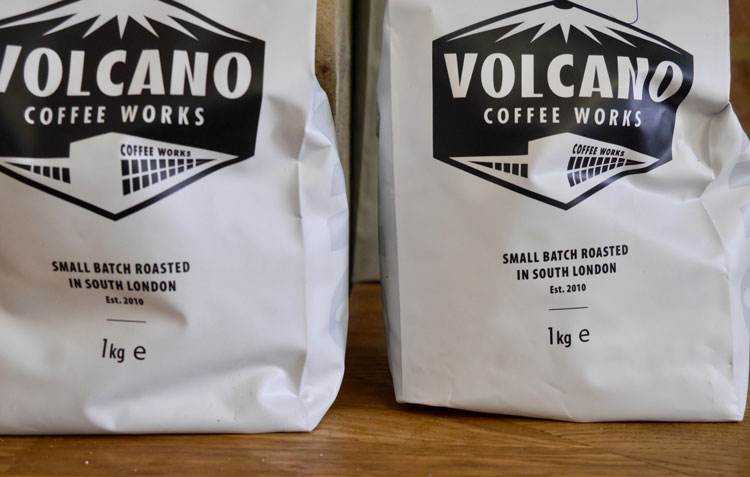 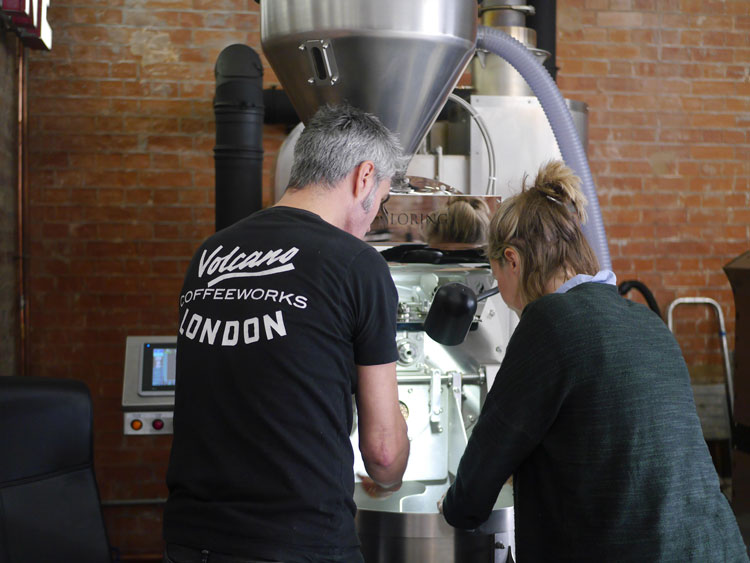 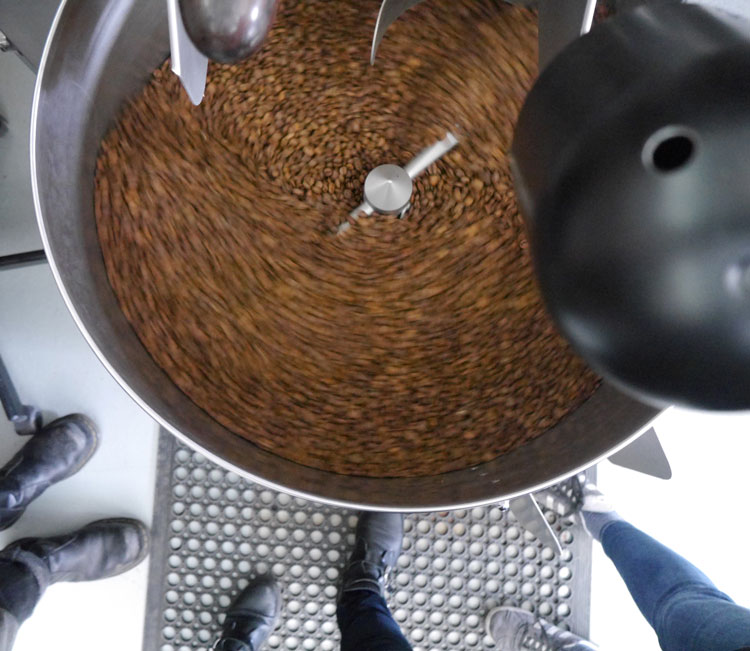